In our switch to the Common Core, I’m finding the only way we can really accomplish everything we’re looking for is to let go a bit, to let students have control. If we are going to say that they are ready for the world, we’ll need to stop scripting the perfectly planned research project and start teaching them to overcome roadblocks and create products that will be useful to them or society. Chris Lehman (@iChrisLehman) even goes so far as to say, “when we are the ones rushing ahead, engagement drops dramatically as we take the intellectual rigor out of the job”(10).

But let’s quote Chris again, “If we are developing students to be creative, flexible, independent learners. Then we cannot scrub away opportunity for mistakes to be made and corrections to be learned”(10). We talked about this at our book study and our school librarian offered up the library for hard days. Days were we might be unsure if kids would come out with anything other than frustration that they couldn’t find any information on “The History of Justin Beiber’s Haircuts” or “Why the Eagles Keep Fumbling?” Days where research topics are changed twice, maybe even three times, can we handle the uncertainty of research?

At the end of the day, and with Bill, our librarian at our side, we decided we could in fact handle the uncertainty. But we were wondering, could our kids? What will our kids do in the face of frustration? Is this something we should talk to them about first? Or should we let them struggle and then bring them together to reflect? What about kids who want to research difficult topics, with little text at their reading level?

Feel free to talk back in the comments. Do you let your kids reach frustration? How do you reflect with your class? What did you notice in chapter 1 & 2 that we missed?

If you have the book, Energizing Research Reading and Writing, I’d like to add on that you should check out page 14 for a great way to help your kids generate ideas for research across the content areas.

And because I’m always trying to make everything a little more fantastic in my classroom, and since I never make too much of anything easy on myself…this year I decided that ALL of my students would learn about Detroit. That’s right, leveled texts and tons of them, hours upon hours of Internet research so every group could access the information, tons of Goggle searches and Youtube videos. I even went to the library, and you know how much that pains me.

This year instead of having Evan work with small groups of ten students in each class, he would work with everyone, right from the start. If Detroit and Evan had so greatly impacted 30 kids last year, why not go for 90? (because it’s crazy, that’s why?!)

Who in their right mind would try to write a new curriculum on a place they’ve never been, using the common core for the first time and incorporating both reading and writing standards for levels three through High School? ahappyteacher

So we jumped in Mid-October. A history of Michigan with focus on Detroit, oh and sing-a-longs for fluency (thank you Bog Segar and The White Stripes). When I tell you I ran groups and made copies, I want you to understand the massive undertaking this was. I think I stayed for over an hour after school on Friday just to do one weeks worth of copying and this unit lasted until the last week in December! 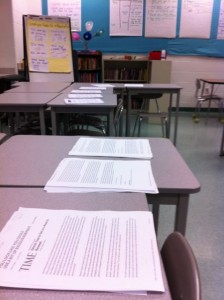 As we studied, the kids shared their information with eachother via skits, power points, photos, drawings, essays, and graphic organizers. Each group had to learn from the other because honestly I couldn’t find the same information at all the different levels. Here’s the catch, each group listened to the other, because each group had the common experience of what we’re calling, “Evan videos”.

Again, Evan filled in gaps I just couldn’t find in texts. He made Detroit real and cool and funny (very funny, if you ever need to make a fourteen-year-old laugh; email me for Evan’s contact info). Like last year, Evan brought learning to life with relationship; work was completed not so much because I was asking them to do it, but more because Evan had suggested it was cool or because Evan had been there before. The power of cool in the life of an 8th grader is unreal.

What am I trying to say here? Why am I doing all this extra work?

Well, part of it is that you’ve got to enter into relationship with kids to make anything work. By letting the kids meet my best friend and interact with him, I make myself more real and they see the authentic nature by which my whole life is run. They know that I write inside and outside of school, because I tell them I do, because Evan tells them I do, and because I suspect some of them stalk me here.

The extra work, the copies, the hours sorting through information? I like learning; Detroit is a cool city, with a rich history. At the end of the day, the more excited I can be about a topic, the more excited the kids will be; my energy, my enthusiasm, my classroom—it’s contagious.