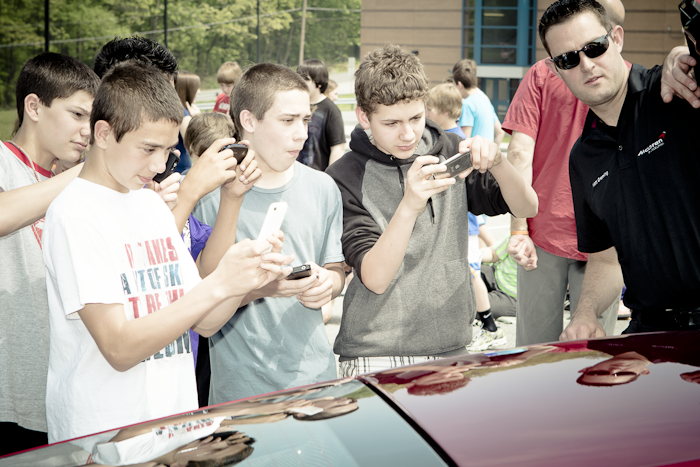 Somewhere between test prep and moments of testing anxiety only a teacher can understand, came McLaren.

I know nothing about cars. But, I can definitely pick out a cool car. So what would be cooler than persuading the McLaren MP4-12C to come see us at school? Well, if it actually worked, nothing would be cooler than that. In fact I think it would make test prep authentic, which is really the reason I hate test prep in the first place, the lack of authenticity in the process.

When we started writing our persuasive letters to McLaren and our Principal, I was all about the details— that is providing valid persuasive techniques, putting the thesis statement in the right place, a genuine rebuttal that actually helped the paper. Somewhere in the middle of all of this, I realized their reasoning had persuaded me too, learning about this car was one of the most educational things we could do for them and if I could make it happen, I would try.

Before I knew it, the science teacher was involved doing materials science labs and talking about the strength of a carbon fiber body. Then the kids were building their own rubber band powered racecars, and it was happening, it was actually happening. 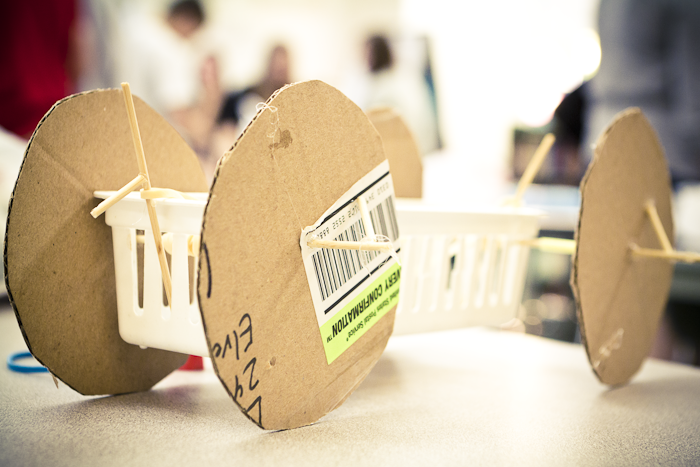 Our math teacher brought the whole project to a new level, planning out McLaren math and getting the kids to figure out Drag Speed Coefficients and things I do not understand at all. He was even e-mailing the Chief Engineer over at McLaren England; I mean really. And so what had started as a really painful test prep lesson became a community building, learning experience, across three curricular areas— oh and one really amazing day with The McLaren MP4-12C! 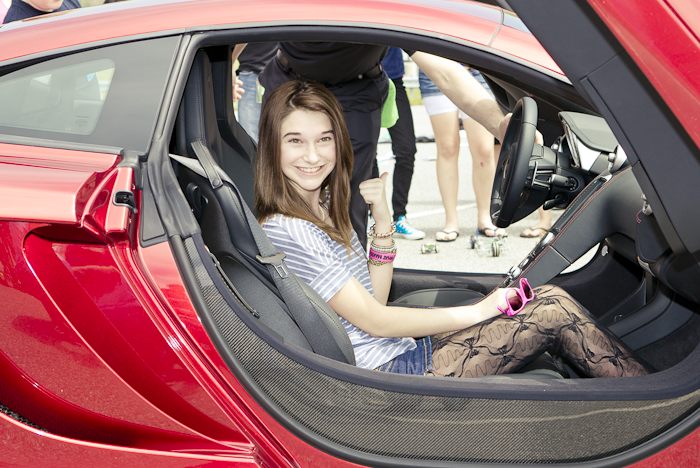 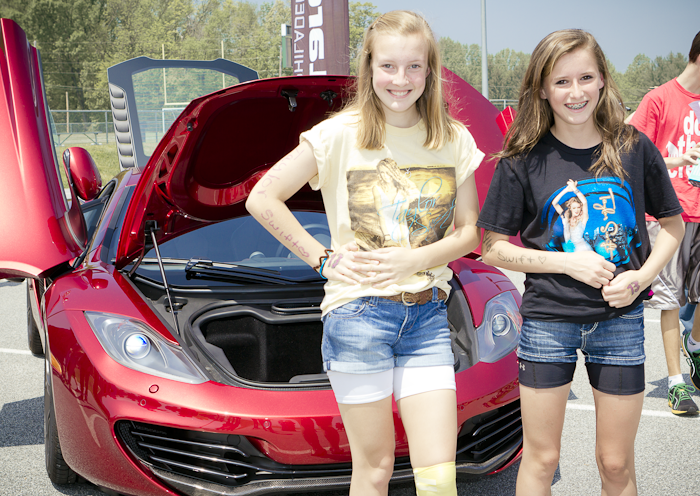 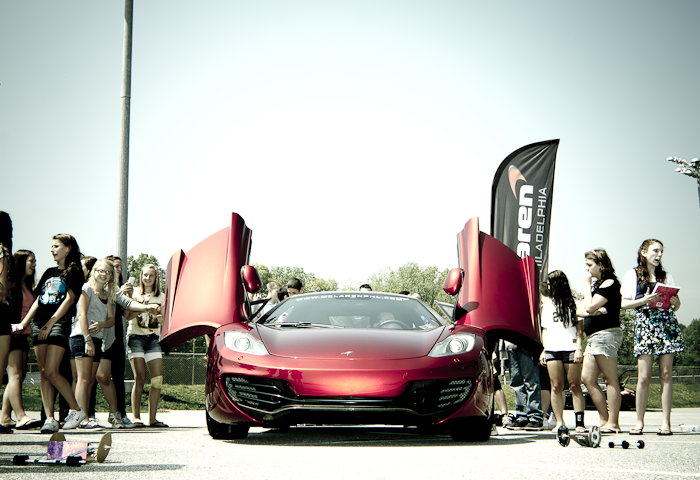 This past summer, I attended Columbia University’s Reading and Writing Project Summer Institute. I remember one class I took with Colleen Cruz, author of Reaching Struggling Writers. Maybe what I remember the most, without looking at my notes, is that if you draw on something kids already think is fun, and then apply writing to it, they’ll be more likely to give you their best work.

Generally speaking, I thought I was pretty good at doing just that. However, it was in this class that I realized I may have been missing some pretty valuable teaching tools. Sports. Video Games. Hunting. Cars. Anything, that I might have previously labeled utterly and totally ummm boring boy?

I made my mind up this summer, that I would open my mind. I would try harder with a topic that my kid’s love, even if the very thought of the topic would be utterly vapid for me.

But in the end, this project, this undertaking, was anything but vapid. In fact it sits high on my teacher shelf of things I loved teaching, loved learning about, and I still can barely believe this all happened to us.

**There was a press release for this day, hence the kid pic love I’m totally able to post. If you love style of these photos, email me at rachel@notesfromahappyteacher.org , and I can set you up with our amazing photographer Evan.

This story was written last year, and never posted. It’s strange how things get away from me sometimes. I can’t believe I’ve never shared this story on ahappyteacher; it’s one of my favorite teacher things I’ve done yet. So before I begin to try and tell you about this year’s project, I’m taking you back to last year and letting you read about . . .

Evan. It’s hard to even begin to describe this Detroit native, or why I think it’s so vitally important that you know him. But, it is.

This fall my students fell in love with Evan and Detroit. The whole thing felt sort of magical. I was running around in my backyard with sparklers on the 4th of July when I discovered my greatest lesson plan yet. I am an eighth grade language arts teacher in Pennsylvania, and when you meet your new neighbor, who bears a striking resemblance to Robert Paterson (Edward, from Twilight), you instantly start dreaming up ways to keep this kid in your life and use him to inspire the young, vampire obsessed teens in your classroom. What I did not know that night was just how much Evan, the young Cullen look-a-like, would change my teaching practice and my classroom.

After one look at his new house, it was apparent that Evan was not from around here. His house is one of the coolest I have seen in West Chester, with little pieces of Detroit hidden throughout it. A picture of Michigan Central Station resides on his kitchen wall next to a framed picture with the word Detroit artfully scribed upon it. On his end table sits a copy of Detroit Home. Ask Evan about Detroit, and you are sure to hear about it for quite some time. If ever a boy loved his hometown, I have certainly found him.

Remembering a Time magazine article about Detroit I had read the previous fall, I asked Evan if he would help my students to connect with the text by providing short video segments about his life and Detroit. This fall a section of my students were dubbed “Detroit” and our lessons began.

At first, the kids found the article, which was above their reading level, difficult to read and the history confusing. They didn’t understand why Detroit mattered. Enter Evan and his first video entitled, “Why I Love Detroit.” My students giggled as he referred to Coney dogs and the ability to get a Greek salad with little olives at the local gas station. They connected with him as he told them of how neither of our football teams, Philly nor Detroit, have ever won a Super bowl. They listened, surprised, as Evan told them of the musical greats that have come from his city.

Now understanding that Detroit mattered to Evan, my students began the research process. Together we learned about the history of Detroit and in turn the history of our nation. My students grew to love and even defend Detroit. They searched for more information online, and when we were stuck, we turned to Evan. We once spent an entire class looking at pictures of the Heidelberg Project. We watched YouTube videos about the city and read online articles and blogs written by true Detroiters. There were timelines charted, concept maps constructed, and comparisons drawn. We listened to their music, took in their art, and salivated over their local cuisine. Our little class had fallen for a city much bigger than ourselves.

As our project drew to a close, so a chapter was perhaps (okay so we made this up, but they’ll never know) closing for Evan too. The students were informed that Evan was faced with the decision of whether to move back to Detroit or to stay here in West Chester, PA. Each student was asked to write a persuasive letter; it became so much more. I realized how much my fourteen-year-olds loved Evan and Detroit. They wanted Evan to stay, because he is part of their lives and has had such success here. They also wanted Evan to return to Detroit– the city he so loved– because they recognized the heart of a true Detroiter: passionate, creative, and motivated. Though they loved Evan dearly, some did choose to send him home to be a part of a city that is “redefining cool.”

When I assign a writing project to eighth graders the first question out of their mouths is, “How long does it have to be?” This time it was, “I can’t pick,” and “Can he do both?” It mattered. They discussed; they read more; they even made movies of questions for Evan to watch. At the end of the week, I collected the best work I have ever seen eighth graders write, some topping four pages in length, and all supported with facts from a variety of sources. The passion with which these students were invested blew me away and brought tears to my eyes.

It was at this point that I truly began to reflect on the process. My kids gained more knowledge than I ever dreamed they would have of Detroit. We had not merely skimmed the surface instructionally; we had gone into the deep waters of comprehension. I had given the students the gift of Evan, someone who would love and celebrate them. Someone who would never dream of grading them or telling them they could or couldn’t go to the bathroom. Evan who would read their papers and write a response to them as though they were long lost friends, not a teacher checking for proper grammar or focus in writing. By letting go a little bit, I had given my students the three R’s I hear so much in the teaching field: Relationship, Relevance, and Rigor. It made all the difference.

In the end, Evan is not moving back to Detroit, but certainly a small part of Detroit has moved into Room 302, and we couldn’t be happier. 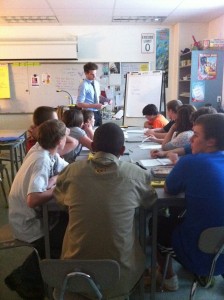